These are pictures taken of the 'after-Christmas party' thrown by Barry and June Jarrett. The names are not changed, because we have no desire to protect the guilty.

Here's what Doug Cadmus had to say about the party:

I'm not sure what I remember. Brain dump follows...

One can never be too rich, or have too much salmon.

Ed is a sneaky shutterbug.

Pink stuff is *not* crackers-optional.

Drew curdles Bailey's, which is likely illegal in several states.

Up is up and down is down, but left is right and vice versa.

Guinness is Good For You.

All in all, Barry and June are fabulous and hugely generous and gracious hosts...

And June, there is *absolutely* enough room on the bake table.

I think Doug summed it up completely, but I'll add a bit of stream of consciousness... I did sleep on the floor, and no cats slept on my face like last year. I drank a LOT of espresso, but still slept after 4:30am. Those tiny eclairs were filled with some sort of very highly addicting stuff. I am embarrassed to even think about how many I ate. Local glazed donuts were way better than any Krispy Kremes I've ever had. I didn't think that was possible. I will never think of pink fluff the same way again. I hope the "Fluff Nazi" is feeling better.

Smoked salmon and salmon mousse were great for breakfast. Barry poured a perfect heart on my demi cappuccino (picture to follow). June has a really cool non-slip grip crystal goblet that holds a lot of wine. June is also so cool. I thoroughly enjoyed her wit and harassment

Guinness and espresso go really well together. I know way too much about the baking table at Riley's. The staff at Riley's that attended the party ROCK! Way cool guys and gals. Lots of fun. I have never talked so much about so many technical things concerning coffee in such a short span in my life. Information overload. The Papua New Guinea green I bought from Barry roasted wonderfully. I love that stuff. Pffffftttttt...on the Chicago coalition that wimped out at the last minute and didn't come. Did I say Pfffffftttttt!!! same goes for particular people from Virginia and Canada that had really lame excuses like..."I gotta work", and "I'm saving my money for better things". Nee !! Nee !!

Thanks Barry and June. 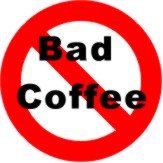 Back to the Main Menu

Ed Needham-Owner
Copyright 1995-2003 © All rights reserved.
Information in this document is subject to change without notice.
This page revised January 29, 2003